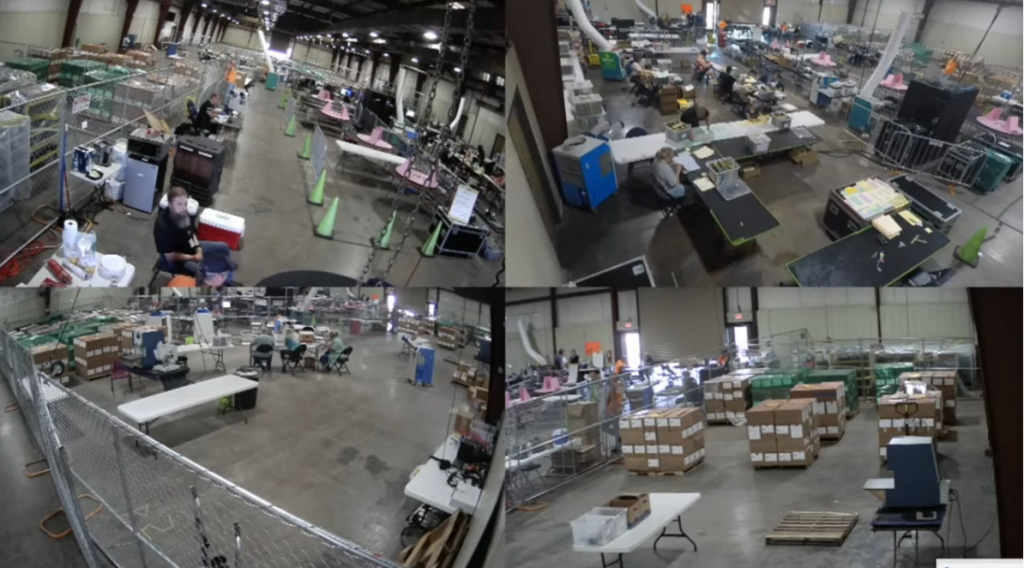 Yesterday, the counting crews finished up the machine count of the Maricopa County 2020 election ballots, done at the request of the Arizona Senate to possibly reconcile differences between the vote count the county certified, and the manual count done by Cyber Ninjas in this exhaustive, detailed, ground breaking forensic audit.  Today, the hot temporary building is quieter, and the people there are all either shuffling papers or working on computers to complete this monumental task.

Having monitored the online cameras installed for transparency and also as another check on the procedures put in place to assure accuracy, I’ll have to say every ballot has been treated with great care.  The reports in media that ballots were left unattended are bunk.  If unattended, they were locked in cages.  Legal representation was on the scene at all times when the ballots were being signed out and chain of custody has been impeccable.

The finishing tasks the computer teams and paper shufflers must do now is make certain every ballot and image is accounted for, and all paperwork tied to each box, batch, pallet is in it’s rightful place to be found if and when needed.

Besides there being security present at all times, even when everyone was gone home, the cameras monitored by the internet were running, and were being watched by folks who reported the slightest thing out of place, like a box top not properly sealed, a paper where it wasn’t supposed to be, someone’s hand on a ballot that was being photographed, so that auditors could follow up and correct any little thing.

No matter what the final report says, and I don’t expect it for some time, the truth will be in it.  Truth.  No more speculation, no more arguing.  And will hold up in a court of law. 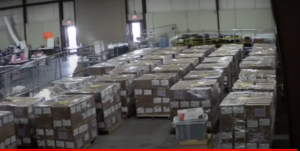 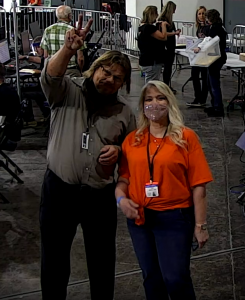 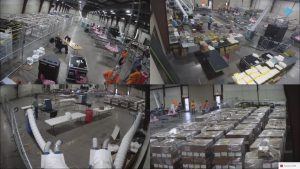 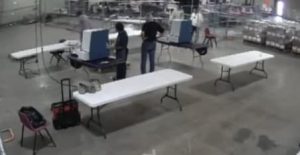 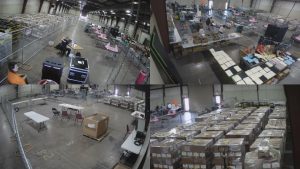 Amazingly, the Ninjas auditing the Maricopa County election are still plugging away in a barnlike setting with no air conditioning in Arizona in mid summer.  Against the elements, against time constraints in the building they currently occupy, they trudge along daily through whatever tasks come to hand.  Going over the blue sheets, (shown in picture on the right) those that had been withheld by the county, and wound up in the hands instead of Audit USA head John Brakey, and incorporating the information from them into the thousands of tally sheet they’ve already accumulated from the many counts must be very hot uncomfortable work in this heat.

I’m so proud of these intrepid patriotic hard working Americans intent on finding out the truth, one way or another, and dotting every i and crossing every t.  I’ve grown connected to each of them, watching them for months do all this repetitive mind numbing task to assure our election integrity, and now and then we watchers get an acknowledgement from one of our favorite players, Lawyer Dude.  Such a hard work.  And all the cage Ninjas moving heavy boxes of ballots around over and over to get them in just the right order, as they were received.  And Lawyer Dude was right in there, hefting boxes as well.

So long as they are there, and the cams are available to us, there is a group that is very accustomed to sharing and reporting anything we see that might be interesting.  Now, they’ve installed high speed counting machines that should be able to count all the ballots, in all the pallets, yet again.  And that was the plan, until the heat and humidity put a temporary stop to it.  Now extra coolers have been installed, extra tubes for venting, and still those counters are not being used.

While all this is ongoing, other states are getting interested in doing full forensic audits, and Pennsylvania is one.  Not happy that Biden will be visiting there to talk about election integrity right now.  Too many times, I’ve read warnings about false flag incidents to turn the publics mind against these audits.  Too often I’ve actually witnessed what I would consider to be false incidents used to turn the media and government forces against us.  I’m not a fan of Biden, but I want him kept safe.  And I have no reason to think his handlers really do.  Too convenient to blame an incident on those of us wanting to restore our country to greatness.  Gen. Flynn has warned us several times about such things.  Pray for his safety, for all our sakes. 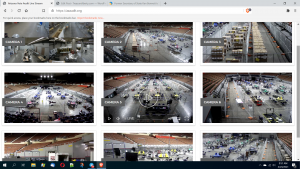 We are still monitoring cams for the AZAudit, but since the equipment, ballots, and much material has been moved to  a temporary facility, we only have one cam available to watch, and that’s the Number 1 quadcam which has four different views.  The ballots have all been wrapped in plastic, and loaded in a rational section, and the machines are right next to them.

Yesterday, fencing was installed around the ballots.  I assume for security.  There are guards, but the are not always visible from the cameras and we watchers are still somewhat part of the security.

Today, they brought in more fencing, and set up a dog run from one door to another, cutting off half the building, and secured the fencing around the machines as well as the ballots.  We are wondering what the plans are, as they were reportedly only to have this building for two weeks.  Hot in Arizona, and it doesn’t look like a cool building!

Reportedly, there is still work to be done by Ninjas to compare the blue sheets which MCBOS never turned over to the auditors.  Instead, Audit USA and John Brakey managed to secure those copies.  So, software is being written to allow incorporation of those records into the tally sheets already recorded, and checked.  Double checking, triple checking.  Over and over.

It’s becoming clear this audit actually cost far more than initially expected, even using volunteers, and while donors have been giving little bits of money for the cause all along, it seems the auditors haven’t been getting all of that money, but only parts of it.  Matthew DePerno, the Michigan lawyer doing God’s work shaking up Michigan, and digging for election irregularities up there, has decided to help out by creating yet another way for folks to get money to the auditors.

Commendable of him.  And considering he’s estimated the actual cost to be 5-8 million dollars, please, if you can afford it, give something, however small.  Cyber Ninjas obviously isn’t a rich rich corporation!  Might actually be bankrupt after this.  That’s just not right.

Gigi Knows made this video from the time we monitored the Maricopa County AZ Audit, and it’s got fabulous memories, audit fashions, wonderful people throughout and I’m proud to have participated in monitoring the cameras. So glad I did it.