As things heat up in the Covid Regime, and the March to end mandates occurred, and Sen. Johnson had his hearing called a Second Opinion, it seems that even ordinary media is beginning to loosen up and report facts, instead of government dictated information.  Today, the Wall Street Journal had this

The High Cost of Disparaging Natural Immunity to Covid

And at the same time, Alex Berensen, now on substack, is getting questions from a journalist at the WaPo because she’s doing an article about research done by The Center for Countering Digital Hate, a non-profit group that is going after misinformation being published on substack.  Imagine that.  There’s a non-profit devoted to doing fact checking on what’s published on substack, especially information about vaccine reluctance.  Astonishing.  Looking around though, I discover from influencewatch.org that they have a list of 8,500 non-profits whose purpose is to influence public opinion and public policy.  Now This Center for Countering Digital Hate is UK based, with office in DC.  And they are pressuring substack to get folks deplatformed because they speak freely there.  Ugh. 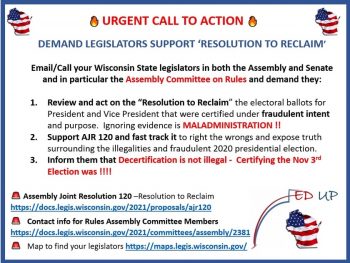 On the election front, something in Wisconsin happened that is truly astonishing!  There’s a move to recall the electoral votes and it actually passed in the Assembly!  It passed the Assembly!  Might not go anywhere in the rest of the legislature, but this is fantastic!  Tied to this motion which passed is tons of evidence the election was shockingly corrupt.  So, so important.  For the most important information on election stuff, JovanHuttonPulitzer is on locals, and well worth the tiny amount for the deep dive into information.  Ramthun is a hero in Wisconsin!