When Maricopa County officials decided at long last after stalling for months that the ballots were ready to turn over for the audit, they tried to trick them so the auditors could be accused of chain of custody violations.  But of the boxes of ballots turned over, only 52 were properly sealed with security tape.  You know, the ones they fixed all pretty for an eventual audit, thinking they would get to choose.  Chain of custody was not violated by the auditors, but by the officials messing with the boxes for months in preparation for turning over enough ballots to match the official cast vote record.  You know, that’s the one the machines create.

They never counted on anyone actually getting to see the actual whole bunch of ballots cast in that 2020 election.  NOOOO!  They thought they’d only need that 52 boxes to show that the machines corresponded with the ballots they had all prepared.  What we have here, as an example only, is the break down of Pallet #29, and all the boxes, broken down to 9 boxes per picture, and inside each, the listed batches in each box, labeled as to the type of ballot, EV is Early Vote, ED, Election Day, etc., and the number of the batch, along with the date when that batch was processed through the tabulation machine.

Interestingly, the way batches were placed in boxes defies any type of logic, and sense of flow.  Not only are they random, chaotic, and in utter dissarray, all of the boxes were unsealed, many showing evidence of having been opened.  These boxes on this pallet were all processed through the four C machines, on November 5 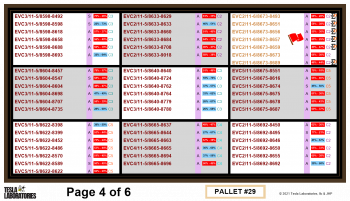 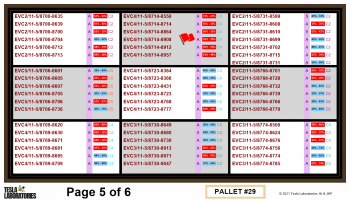 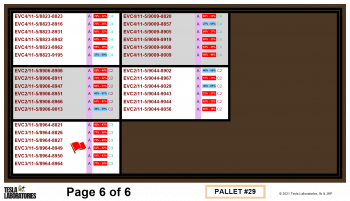 and November 6.  Each of the 45 pallets are broken down with a great degree of detail in these fantastic PKAD Ballot, Batch, Data Visualization Charts provided by Jovan Hutton Pulitzer as yet another of his data visualization presentations that show just how badly Maricopa County election officials tried to hide the fact that the election was totally predetermined, stolen, and set up to match ballots to the machine count, after it was determined they could not get away with a simple machine risk limiting audit they though would satisfy.  To this day, 97,000 ballots are missing, and were never turned over.

CyberNinjas did a fantastic job of seeing to it all of the ballots were photographed in high definition, and turned all that over to Jovan for the forensic PKAD analysis and investigation.

In turn, all these reports and visualizations have been turned over the Attorney General Brnovitch and his staff for prosecution of what could be as many as 15 different felony violations.  More reporting will be forthcoming, and greater explanation of what we are seeing as well.  The audit team of CyberNinjas, CyFir, and Jovan Hutton Pulitzer have done the only full forensic audit of any election ever!  They’ve been punished for the effort.  Yet the American people will forever be indebted to them for their patriotism and their tremendous job.

PS:  https://www.fatfreecartpro.com/i/11cza  Link to the download for this report.